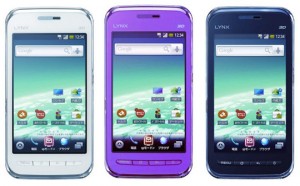 After having released a pair of glasses-free 3D Android smartphones, Sharp will be teaming up with NTT Docomo to release the Android-based LYNX smartphone, which will use the same glasses-free touchscreen display that’s found on the other two handsets and the Nintendo 3DS. The LYNX 3D will be coming in December and offers the ability to capture 3D photos and view them on the 3.8-inch WVGA touchscreen.

The phone will be released with Android 2.1, which won’t have native support for Adobe Flash 10.1 Mobile, but the carrier is promising that an upgrade to Android 2.2 Froyo will happen by Spring 2011, which will bring Flash support.