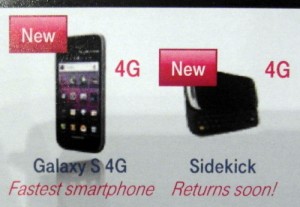 At a press event, PC Mag is reporting that the nation’s fourth largest carrier has confirmed that it plans to release a Sidekick 4G and Galaxy S 4G (also dubbed the Vibrant 4G) “coming soon.” Slides of the devices were shown in a presentation by CEO Philipp Humm.

The revival of the Sidekick brand will help T-Mobile strategically bring a familiar brand back into its arsenal as it battles Verizon Wireless and AT&T, the nation’s first and second largest carriers, and the iPhone. Rather than using the proprietary Danger OS from Sidekicks of yore, the new Sidekicks are speculated to use Android as the underlying operating system while retaining a familiar swiveling keyboard. Historically, the Sidekick devices were targeted at the younger demographics and the inclusion of a hardware keyboard will continue T-Mobile’s focus on this segment with their texting and emailing habits.

In a separate note, a Vibrant 4G as a Galaxy S variant was confirmed and is said to probably launch at Mobile World Congress in February according to the carrier’s Chief Marketing Officer.