Skype for Android Brings Video Calls to 17 Devices, Including ThunderBolt

Skype has finally released an update to their Android app which brings video calling to the masses. Skype 2.1 is now available with support for video calling on 17 new devices, including many popular smartphones.

The update brings video calling to Android 2.2 device from several manufacturers as well as bug fixes and performance enhancements.

Support for video calling on Android devices has been a long time coming, especially for owners of the HTC ThunderBolt who  still don’t have a real reason to use their front facing camera since launch. Update: The majority of ThunderBolt users will be stuck using the rear camera until Gingerbread updates arrive in Q3.

The list of new Android devices which support video calling is impressive, with all of Verizon’s 4G lineup on the list alongside top phones from T-Mobile, AT&T Sprint and 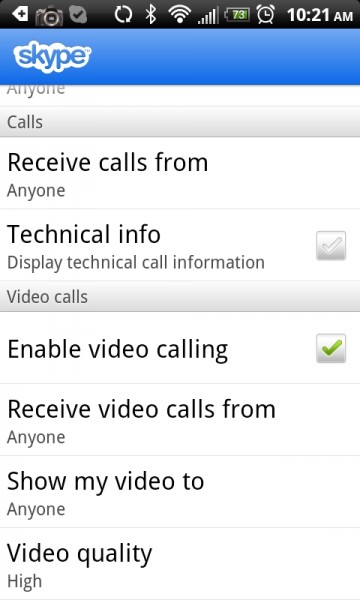 The new Skype 2.1 app should have video calling enabled for these devices. If your device does not have video calls enabled, you can turn them on in the settings menu.

According to Skype, this update makes video calling available on the majority of Android devices. As a ThunderBolt owner it is great to have a video call app available which lets me connect with contacts on many other systems, like the iPad or notebooks, without the need to get people to sign up for a different service.

Get Skype 2.1 from the Android Market for free today.