As if you needed any more proof that there is something wrong with the U.S. Patent system, Apple has been awarded a patent for using Slide to Unlock as a means of unlocking  phone.

The Slide to Unlock action gained popularity with the iPhone in 2007, and since then has come to pretty much every smartphone platform. Now that Apple has the patent on Slide to Unlock, which was filed in December 2005, no other devices get to use this method of unlocking.

It will not likely affect the devices already in your hands, but it will be interesting to see if Google changes anything in Android 4.0. 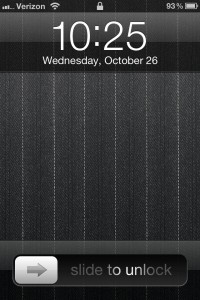 Currently, the following devices use some form of slide to unlock;

We know that Apple loves to get legal with Samsung on patents, so I wouldn’t be surprised to see a filing against the Samsung Galaxy Nexus in the near future. While the new version of Android 4.0 uses a different sliding interface, you are still sliding to unlock, which may prove to be an issue. This phone will also allow you to unlock with facial recognition, which is cool, but can’t help you unlock to inconspicuously check your email in a meeting.

Why is this so ridiculous? Even if you do think that companies should be able to patent designs and actions such as slide to unlock, the video below shows an earlier device using a slide to unlock gesture.

If you skip to 4 minutes in, you can see the Neonode N1m being unlocked with a slide action. This doesn’t look the same as the iPhone, but remember, the Android unlock screens don’t look exactly like the iPhone slide to unlock.

It will be interesting to see how this changes the way we unlock our devices. The Samsung Stratosphere, which just came out on Verizon, has a puzzle unlock control. You are asked to put a piece of a puzzle in the correct spot to unlock the phone. I’m not sure if this method is safe, but perhaps this will keep some devices safe.