Nielsen just released the results of their latest survey of mobile phone users and the results show that smartphone ownership is growing steadily, especially among adults aged 18 to 44 years.

Smartphone ownership amongst 25 – 34 year olds is at 62%, and a little over half of 18-24 and 35 – 44 year olds own them over basic or feature phones. Smartphone use among older folks is growing as well.

The numbers aren’t all that surprising given the popularity of smartphones and the general tech-savvyness of Gen X and Gen Y. What I wish Nielsen would also track is penetration by gender and by race/ethnic group. There’s still a pretty wide digital divide going on as regards race, and I’d be interested in knowing the percentage of men using smartphones vs. women. 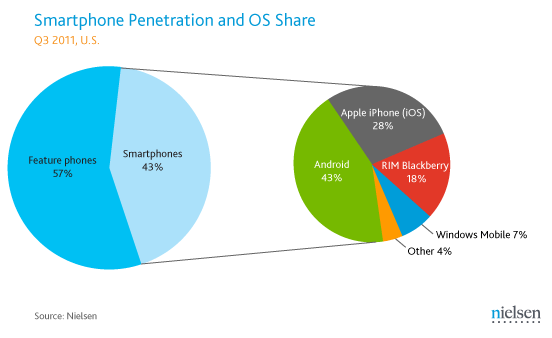 Nielsen’s data shows that feature phones still make up the majority of the market with 57% of those surveyed owning basic phones over smartphones. I suspect that by this time next year the gap will close even further.

Android is the most popular platform, taking up 43% of the smartphone market share. iPhone is at 28% and BlackBerry at 18%. As more people leave the CrackBerry behind, I wonder if they’ll go to the iPhone or join ranks with Android users? Poor Windows Mobile is stuck at 7%.