Nielsen released some very interesting numbers today, summarizing Americans’ smartphone habits and desires. One out of four phones are now smartphones, an increase of 56% over the past year. For the first time, more Android devices were sold in a quarter than iPhones. With a 27% share of new subscribers, Google’s free mobile operating system is clearly on a tear, but the iPhone still remains the most desired smartphone amongst those planning to buy a new one. 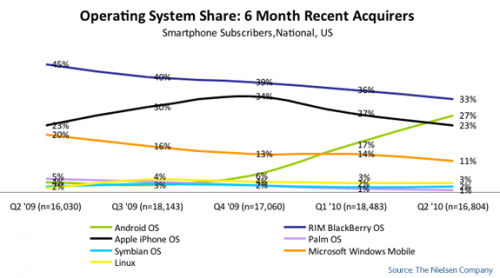 While Android and iPhone subscribers are way up over the past year, sales of WinMo and Blackberry smartphones are falling off a cliff. Just a year ago 45% of new smartphone activations were Blackberry devices and 20% were WinMo. Last quarter, those numbers were just 33% (27% drop) and  11% (45% drop) lower, respectively. 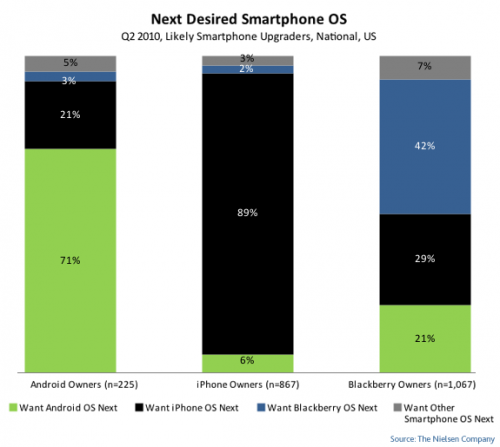 The only thing worse for Research in Motion than its sliding market share is its own customers’ views. According to the Nielsen’s survey, only 42% of BlackBerry users want another BlackBerry as their next smarphone, with just over a quarter eyeing an iPhone next and 21% want an Android device. This is far behind iPhone and Android users’ loyalty to their respective mobile operating systems. Despite all of the complaints of shoddy AT&T coverage, antenna problems and other issues, U.S. 89% of iPhone users plan to upgrade to another iPhone.

The smartphone market is still in its infancy, with 75% of the mobile phone market up for grabs. It’ll be very interesting to see how (or if) Microsoft’s release of Windows Phone 7 mixes these numbers up next quarter.