The makers of Snapdragon BatteryGuru announced an update to their utility which helps users get more battery life out of their devices using Snapdragon processors. The update will actually tell users when they should plug in based on their usage.

We reviewed BatteryGuru and found that it extended the battery life on a Samsung Galaxy S4 by between 30% and 50% consistently.

For example, if a user wakes up and uses their phone a lot for 90 minutes almost every day at 7:30 a.m. and then lays it down every morning around 9:00 a.m., then the program will use the Android notification system to let them know they should charge the phone while not in use during this mid-morning period. That way, when they normally use the phone a lot during late morning and into the afternoon, then the battery will still keep the phone running the rest of the day instead of running out of juice around 8:00 p.m.. 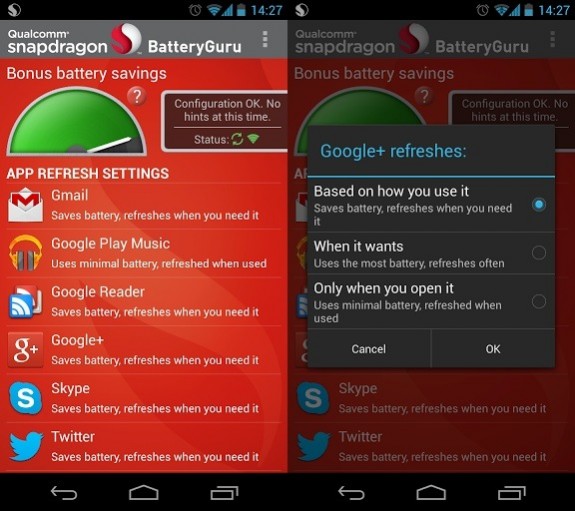 Get better Samsung Galaxy S4 and HTC One battery life with BatteryGuru.

Why would someone want this feature? Obviously, it helps an owner get through the day with the phone. People don’t think about charging a phone’s battery when it reads 70% battery available. However, after listening to music and using the GPS to find afternoon appointments and then reading and playing games on the commute home, the phone might not make it all the way home on a bus or train commute.

People using a phone with a Snapdragon processor can get BatteryGuru in the Google Play Store for free. It installs on many phones, but we couldn’t install it on the Google Nexus 7 or Nexus 10 tablets.

We liked that the original version of BatteryGuru saved battery life simply and without the need of any customizations by the phone’s owner. It works by keeping track of usage for a few days, then it changes settings for the user to keep the phone running longer. The charging notification happens after a week of use, so wait patiently.

Users seem to like BatteryGuru since they’ve downloaded the app over 650,000 times since the app’s introduction to the Google Play Store in May. Reviews roll to the positive end of the scale with most over 3 stars.

Some phones that include Qualcomm Snapdragon processor include: