If you can’t wait until November 20th to get your hands on the HTC Titan you can order one from Amazon for full retail. You might balk at the $799 price tag, but not too long ago, this would have been a bargain for a hot new phone. In fact, I have personally spent $1200 for one phone just to get it months before it dropped here in the US. I estimate that I have spent over $10k buying European HTC models over a couple-year period when I was running Mobilitysite. Back in that time frame, my town didn’t have 3G yet, so getting an overseas model only capable of getting EDGE didn’t matter to me. The good news is that, according to WP Central, the model available on Amazon is the same as their review unit and it will hit 3G speeds with AT&T but only EDGE on T-Mobile’s network. 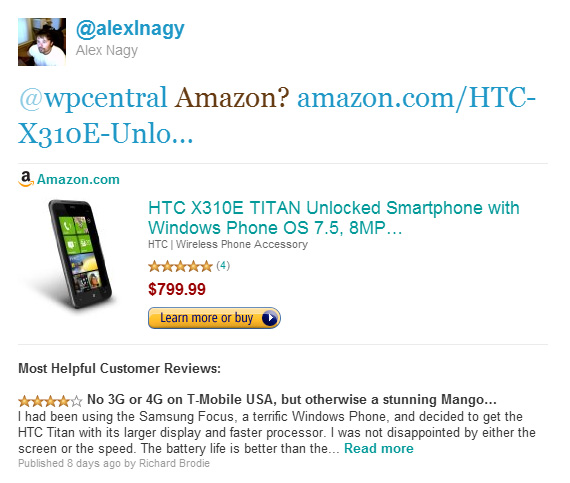 If the lead time was longer, more like 1-2 months instead of weeks, I would be all over this. The Titan is the next phone I want as my daily driver. I am not 100% convinced that I am going to enjoy WP7.5 daily, but I am ready to try it. I wasn’t super impressed with WP7 and decided to wait an update or two to give it another go. Now is the time!