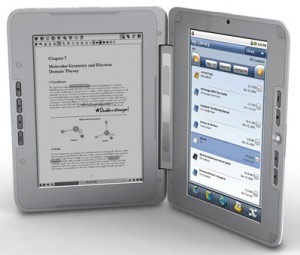 This shouldn’t come as a real surprise to Tablet watchers, but there are reports that we’re starting to see some casualties in the ranks of promised as well as delivered Tablets.

First up is word that the Entourage eDGe digital content store is closing down and that is fueling speculation (probably very accurate speculation) that the dual screen Tablet is going down for the count. Users who purchased an eDGe device (there are two of the them the Pocket eDGe and the eDGe we’ve all seen a gazillion pictures of). Users are being urged to install the Amazon Appstore to get applications for the Android portion of the device and also to shop the Google Books store for eBook content to read on that eInk screen. The dual screen eDGe devices will intriguing were price much higher than the intro price of $499 that is no obligatory to beat.

And on other fronts, word is that Toshiba might be abandoning plans for its Windows 7 Tablets as well as a Chrome OS based slate. Ditching Windows 7 plans isn’t that surprising given we’re heading into the dawn of the Windows 8 era (whatever that will mean) and we’re already hearing we may see more about the Windows 8 Tablet UI soon. Apparently when Toshiba is thinking Google it is thinking Android, as in Honeycomb and enthusiasm for Chrome OS is fading as fast as the drop in Netbook and Smartbook sales.

Quick, a show of hands.  Anyone surprised? I didn’t think so.