This has been a good week for the mobile gaming crowd, and for those of us that love Sonic the Hedgehog it just got better. Sega announced that Sonic 4 Episode 1 is now on the Android Market.

Like Grand Theft Auto III this release is meant to pluck the nostalgic strings in your heart by offering a mix of classic gameplay and levels with a few new twists.

The game is compatible with all devices with Android 2.1 and up. Galaxy Nexus users should know that there are some issues with the game on Ice Cream Sandwich. Sega is aware and working to fix them, but perhaps you should wait until that happens before you plunk down $3.99. 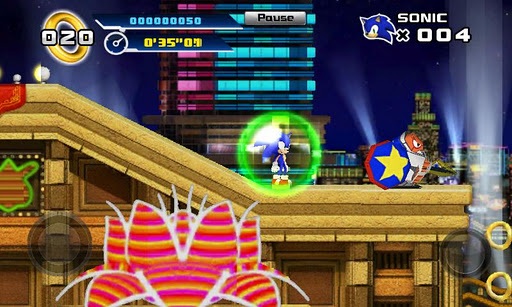 On most levels you control Sonic via software D-PADs on the screen. Two levels exclusive to the mobile version utilize the accelerometer for control.

I don’t mind on-screen controls in general. Having physical buttons just feels more like gaming to me. I can’t wait to see if Sonic 4 works well with capacitive joysticks and accessories like the iCade Mobile.

Now that Sega is on a roll with classic game releases, which titles do you want to play on your smartphone or tablet? I’ve been feeling the need to bust out some Ecco the Dolphin moves, lately.