Ahead of Samsung’s rumored Ice Cream Sandwich-powered portable media player, Sony has announced its latest Walkman F800 PMP with Android Ice Cream Sandwich out of the box. As the device comes pre-loaded with Android, users will have access to Google’s Play Store to download apps, games, and content including music, TV shows, movies, and magazines while connected to a WiFi hotspot. 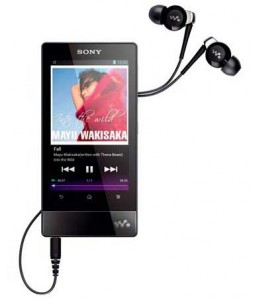 The Walkman F800 comes with a 3.5-inch display which gives it a more portable footprint akin to Apple’s competing iPod Touch.

Thus far, Sony has not announced pricing nor availability for the latest Android Walkman. The device will come with Bluetooth and WiFi for connectivity and will be available in capacities of 8 GB, 16 GB or 32 GB. According to Sony, the Walkman F800 has a battery life of 20 hours for music playback or 4.5 hours for video.

The Walman F800 will ship with a set of earphones and has a built-in xLoud speakers if you want to play back music without using the earphones or connecting to separate loud speakers.