If the leaked specs sheet is accurate for the Sony i1 smartphone, which has a Honami code name and will likely debut with the Japanese electronics-maker’s Xperia consumer branding, then we may see interchangeable lenses go mainstream on an Android smartphone. Sony appears to be leveraging its consumer Cybershot branding to tackle Nokia’s PureView imaging technology as well as Samsung’s push into the Android camera phone market with its Galaxy S4 Zoom offering.

Interchangeable lenses have been available as an accessory add-on for many popular smartphones today, but the solutions are expensive and don’t come pre-packaged with the devices. 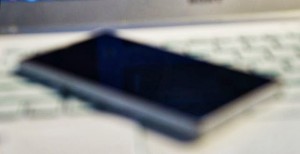 Blurry cam shot of the Honami

An interchangeable lens system would give the Honami more flexibility, but won’t be as convenient for most consumers as having a built-in telephoto zoom as the Galaxy S4 Zoom or even the Galaxy Camera. Switching lenses takes time, and it also requires users to carry the right lens(es) with them for the right shot, which most users probably won’t do.

Samsung is rumored to be debuting an interchangeable lens smart camera based on Android as part of its mirrorless NX system range at the company’s June 20th event. Interchangeable lens on that system makes more sense with a larger sensor size and a focus on the prosumer market.

According to the leaked specs sheet, which should still be taken with a grain of salt, the sensor is fairly large for a camera phone measure 2/3-inch. The rear sensor will either be a 20-megapixel sensor or a 13-megapixel sensor. Previously, we’ve heard that Sony would be using a 1/1.6-inch sensor, so this new sensor size would be larger.

A larger sensor is better and more desired as it helps the capture more light and details.

And while Nokia may be using Carl Zeiss optics for its camera phone offerings, including on the Windows Phone 8 Lumia series, Sony will be leveraging its pro-series G lens for optics. Additionally, the phone is said to have dual LED flash along with a single Xenon flash. A dedicated camera shutter button shows that Sony is serious with the phone’s camera and imaging capabilities, giving user easy access to launching the camera app.

Combined with a water resistant and dustproof body, a metal and strengthened glass design with possible carbon fiber to lighten the weight, dual speakers, and some pretty advanced specs, this could either be a fanboy’s wishful thinking or one of the best phones with some great imaging technology to be released. Either way, we should probably know by fall, which is when Honami is rumored the be released.

Complete specs list is below, as detailed by Phone Arena.