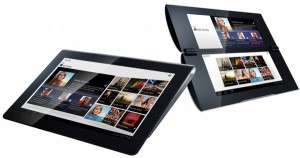 It looks like Sony may be on schedule in launching its pair of Android tablets, a first for the consumer electronics-maker, and the S1 and S2 tabs may appear as early as September in Europe. A private note from Sony’s marketing group obtained by Engadget reveals that Sony may be taking pre-orders for the tablet as early as August for a release date as soon as the end of September. The note mentions that availability for the tablet in the UK will be through: “Sony Direct, UK department store John Lewis, and a third still-unconfirmed retailer at launch.”

Both the single-screen S1 tablet and the dual-screen S2 tablet were seen passing through the FCC recently. The tablet is also expected to come with 3G mobile broadband support, with AT&T-compatible frequencies, in the U.S. The tablets are expected to focus on the gaming market.