Seems Sony wasn’t done after posting pictures of the upcoming Sony Xperia i1’s slim profile last week. Today, the company has returned to Twitter again, this time with a clear photo of the device’s rear-facing camera.

Sony added the picture to its #bestofSony hashtag today. Although the device’s entire body can’t be seen, if Sony hasn’t tampered with the aspect ratio of photo too much, the Honami i1’s rear-facing camera sensor is huge. The photo accompanies a message asking users if Sony has “captured [user’s] attention yet…?”

An enlarged rear-facing camera sensor on the device aligns with the leaks and rumors that have swirled around it since earlier this year. According to most reports, the Xperia i1 has a 20 rear-facing megapixel camera, whose sensor is 2/3 inch in diameter. A sensor that size could allow the Xperia i1 to capture photos with even greater detail than some of today’s bestselling smartphones, like the iPhone 5 and Samsung Galaxy S4. 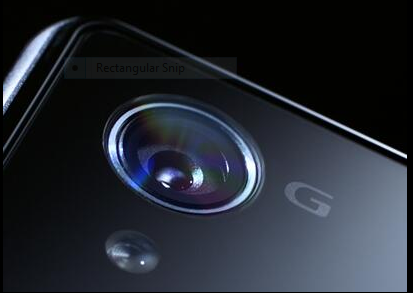 Another teaser photo of the Sony Xperia i1.

In the picture, the rear-facing camera is flanked by a small camera flash LED and the letter ‘G’. As none of Sony’s recent smartphones featured any sort of letting on their rear, it’s likely that the G is somehow related to how Sony plans to market the enhanced camera technology that is included in the Xperia i1. If that is the case, it wouldn’t be too different from how HTC markets the HTC One’s UltraPixel camera. It too uses an enlarged sensor and pixels to deliver crisp photos.

The Xperia i1 could include a 5-inch high-definition display and 16GB of internal storage.

These camera optics, plus the rumored camera application likely to début onboard the Sony Xperia i1, indicate that the device is almost entirely focused on delivering users a best-in-class camera experience. That matches what we’ve heard about the rest of Sony’s IFA announcement lineup as well.

Reportedly, Sony will also use its September event to announce a new line of lens-cameras, smartphone accessories that come equipped with professional-grade camera lens and connectivity. Pictures of the first two devices in the new line, the DSC-QX10 and he DSC-QX100, leaked earlier this month.