Sprint’s Kyocera Android tablet may not be the lone dual-screen consumer tablet for too long as Sony is rumored to be working on its own dual-screen Android tablet with the codename of S2. According to Engadget, the S2, unlike the S1, may not be a Playstation Certified device, as Sony is looking to position the S2 as more of a reader than a gaming tablet. 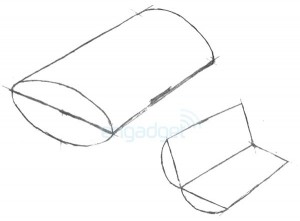 The S2 will have larger displays than the Kyocera Echo, with each display panel measuring 5.5 inches. The device follows a patent filing that was made by Sony in 2010 about a dual-screen digital reading device. The tablet, when closed, will have a nice elliptical cylindrical form factor.

The S2 will be powered by a Tegra 2 chipset, bringing dual-core CPU performance from NVIDIA. It will have WiFi and 3G support.

Like the Echo, the purpose of having dual displays will help to augment the user experience. One application will be to provide an email list on one panel and show the email content on the other panel so users can triage emails like on a desktop without having to open the email to see the content, exit the email to go back to the list view, and then tap on another email to see the body and repeat that process. Each display will serve as a pane and will be able to deliver a desktop-like user interface.

Sony will likely use a customized Android build for its UI and will probably not use Honeycomb. The company is anticipated to ship the S2 in time for the holiday shopping season for $699, which will give you the WiFi + 3G model.

Additionally, Fujitsu had more recently demoed a dual-screen Android tablet concept of its own as well at MWC.