The highly anticipated Sony Xperia S Android 4.1 Jelly Bean update, which should be arriving at some point in late May, has leaked ahead of its release leaving those Xperia S owners looking to upgrade early a chance to do so.

Last week, Sony finally announced some official details regarding the Sony Xperia S Jelly Bean update, an update that owners have been looking forward to for quite some time. Sony has yet to announce a specific release date for the software but it’s clear that it’s working hard to meet its late May release date as a new software leak has surfaced, giving Sony Xperia S owners a look at the upcoming Android 4.1 Jelly Bean update for their devices. 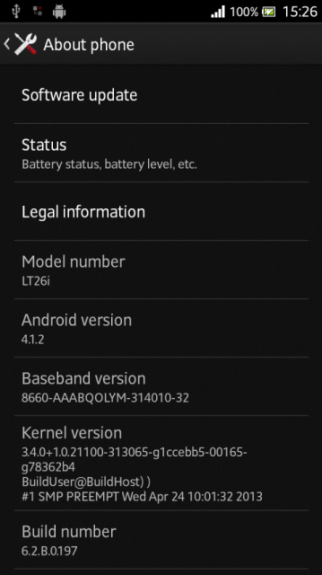 The Xperia S Jelly Bean update has leaked ahead of its release.

However, it appears that the software has been made available for consumers and that the software is extremely stable and fully working, meaning the Sony engineers working on this software are extremely close to a final version, if they aren’t there already. This new Jelly Bean build was evidently released only a few days ago.

Of course, owners who wish to install this software will need to do so at their own risk, knowing that a final build is due in May at some point. We imagine there are more than a few owners who are becoming impatient so this avenue is now available.

It’s unclear whether Android 4.1 Jelly Bean will be the last update for the Xperia S but we imagine that given the time it has taken with Android 4.1, that an update if it comes, won’t come for many months down the road, if at all.

Android 4.1 Jelly Bean will be replacing Android 4.0 Ice Cream Sandwich as the device’s on board software, a change that will bring a ton of new features including a faster UI, Google Now, and more.