It looks like Sony is planning a new tablet to followup the Tablet S, this time with the Xperia brand name.

According to The Verge, leaked Sony documents show a new “Xperia Sony Tablet” that looks a lot the Tablet S with the same fold-over design. The Xperia tablet uses Android 4.0 “or later,” and will come with options for 16GB, 32GB, or 64GB models, just like the iPad. Also like the iPad, Sony will offer 3G connectivity in the Xperia tablet, though no word on 4G LTE.

The Xperia Sony Tablet will also have a 6000mAh battery which will last for 10 hours while web browsing. The relatively large battery fits inside the case that’s just 8.8mm thick and 42 percent thinner than the Tablet S. 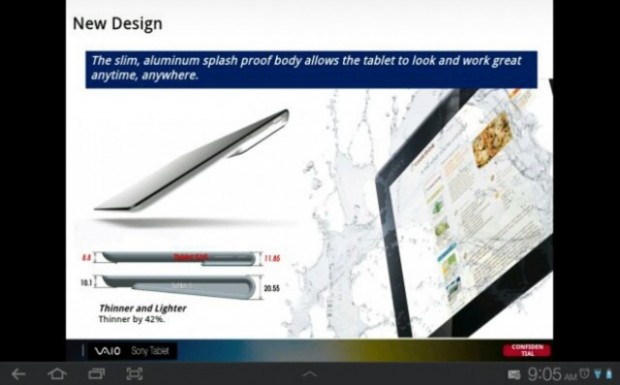 Sony will also offer a keyboard case for $99.99. The keyboard case looks like a cross between a Smart Cover and the Surface’s Touch Cover. It’s very thin and offers a touch keyboard. Unlike the Touch Cover, however, the Xperia Sony Tablet cover doesn’t appear to have a section for a mouse.

Unfortunately there’s no release date for the Xperia Sony Tablet as of this time.