The Sony Xperia Z Tablet, announced earlier this week for Japan, has made two promising appearances today ahead of its eventual arrival as a challenger to Apple’s iPad, the Nexus 10 and more.

Earlier in the week, Sony took the wrappings off of its brand-new and exciting tablet, the Sony Xperia Tablet Z, a device that riffs off of the company’s previous 2013 launch, the Sony Xperia Z. Both devices are quite similar, employing sleek designs, powerful hardware, and useful software, but of course, the Xperia Tablet Z is far bigger than the 5-inch Xperia Z smartphone. 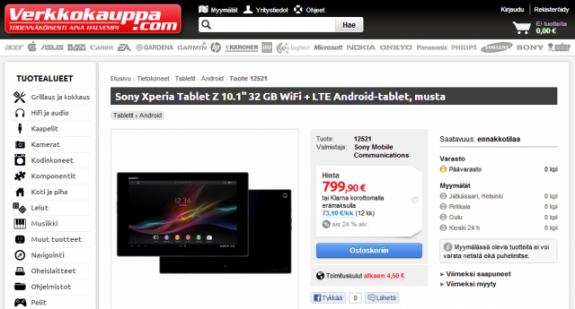 The Xperia Tablet Z has appeared on video and at a Finnish retailer.

And while the tablet looks like a fantastic addition to a year that will surely be shock full of tablet releases, Sony neglected to offer any information about the tablet’s release date in places other than Japan. Lucky for those that are looking to get it outside of Japan, there is some good news afoot.

The Xperia Tablet Z, according to XperiaBlog, has shown up on a Finnish retailer’s website with an unconfirmed price and availability. In fact, the listing has since been pulled down from the website for unknown reasons. And while it’s unclear exactly why the retailer pulled the device, it’s fantastic to see the device appear in a region outside of Japan as the company still hasn’t made international plans known.

No word on how close a global launch might be, but this appearance could be a sign that something is close, even if the offering was pulled. This is potentially big news for those looking to get their hands on this tablet, and as of right now, it’s possible that many consumers might be.

And that’s because the Xperia Tablet Z looks like Sony’s best effort, as far as a slate is concerned, in quite some time. With a 10.1-inch 1920 X 1200 full HD display, quad-core processor, a back-side illuminated rear 8-megapixel camera sensor, it’s an intriguing device for consumers.

Those looking to get a closer look will also be interested in the device’s first hands-on appearance, courtesy of Ameblo, which showcases the slimness and quickness of the Xperia Z Tablet.

The video doesn’t show off everything, but it does give consumers a glimpse at what to expect from the Xperia Z Tablet, a device that will replace Sony’s Tablet S.

For now, this is the closest consumers outside of Japan will bet to the Xperia Tablet Z. Hopefully, Sony clears up the launch situation sooner rather than later so consumers around the world have the opportunity to buy this iPad competitor.