Those not looking to pick up an iPad or Nexus 10 now have another option on the table today as the long-awaited Sony Xperia Tablet Z has gone up for pre-order through Sony with a release date planned for May 24th.

At CES 2013, Sony introduces both the Xperia Z and the Xperia ZL, two new Xperia branded smartphones. However, it wasn’t content with only those. It also unveiled the Sony Xperia Tablet Z, an Xperia branded tablet that it hopes will compete against the likes of the iPad, Nexus 10, Asus’ lineup of Android powered tablets and more. 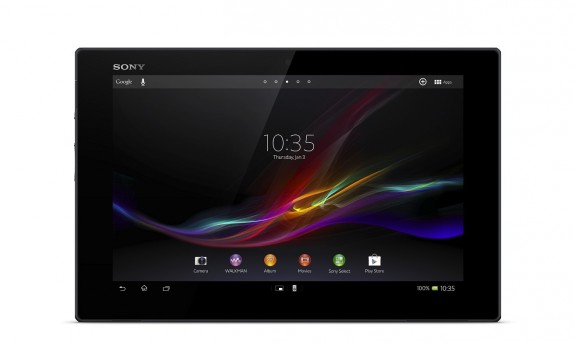 The Xperia Tablet Z is now up for pre-order in the U.S.

Over the past few months, Sony has inched closer to a release of the Xperia Tablet Z, going as far saying that the device would be hitting shelves during the month of May. Until today though, we didn’t know when the device would go up for order or when those interested in buying the 10.1-inch tablet might be able to get their hands on the device.

Today, Sony put the Xperia Tablet Z up for order in the United States for the first time with Sony taking pre-orders for a cool $600. That price nets consumers a 32GB Xperia Tablet Z and a charging cradle that Sony is bundling in with the new tablet. The company says that it expects to ship the device out by May 24th, a date that falls in line with its previous statements about the Xperia Tablet Z release date in the U.S.

The Xperia Z will start shipping by May 24th, it seems.

The device will be attempting to compete against the Nexus 10 and iPad 4 and on paper, it looks like a device that could appeal to those in the market for a larger tablet.

The Xperia Tablet Z will come with some high-end specs including a 10.1-inch 1920 X 1200 full HD display, quad-core processor, and a rear 8-megapixel camera sensor, which is geared for low-light photography.

We imagine that the tablet will pop up in places other than the Sony Store but as of right now, this appears to be the only way to pre-order the Xperia Tablet Z, at least in the U.S.