The Sony Xperia Z Ultra, Sony’s massive 6.4-inch smartphone that will be arriving later on this fall in countries outside Japan, has been pictured next to the 5-inch Xperia Z and the Xperia Z Ultra makes the Xperia Z look absolutely tiny by comparison.

In late June, Sony announced a new version of its Sony Xperia Z flagship dubbed Xperia Z Ultra, a larger version of the Xperia Z. The device is slated to arrive this fall with release date rumors pointing to September.

Sony’s new Xperia Z Ultra features a number of enticing specifications including a 1080p display, 2.2 GHZ quad-core Snapdragon processor, 8MP camera, and a design that is both water and dust resistant like the original Xperia Z. It will also come with support for pencils and styli, much like the Samsung Galaxy Note 3. 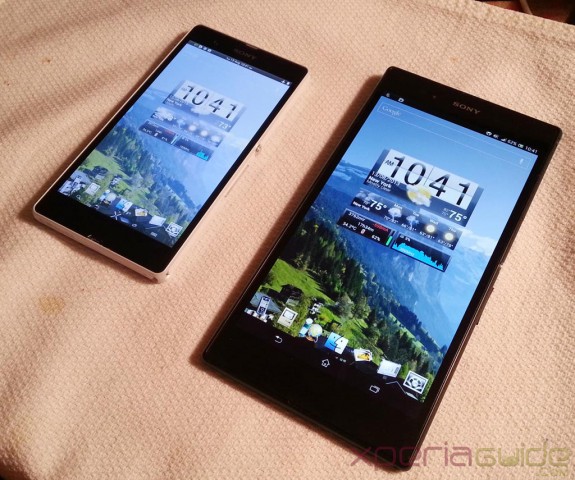 The Sony Xperia Z Ultra is about as big as smartphones get.

The Xperia Z Ultra also comes with an enormous display, 6.4-inches to be exact, and thanks to photos from XperiaGuide, we now know just how that will translate into real life.

We also get a glimpse at just how thin the Xperia Z Ultra is as it checks in with a frame that is just 6.5mm thin, thinner than Apple’s iPhone 5. The Xperia Z, by comparison, is 7.9mm thin, still very thin for a smartphone.

The device makes even the 5-inch Xperia Z look small.

We still don’t have a release date or carriers for the Xperia Z in the United States but given that the Xperia Z arrived on T-Mobile, it’s possible that we could see Sony’s smartphone monstrosity arrive for the Magenta carrier at some point in the future. The device has passed through the FCC with T-Mobile bands, but it’s up to the carrier to decide if it wishes to officially support it.