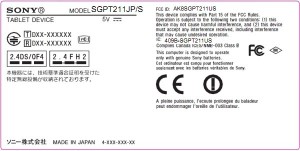 Sony’s dual-screen Android S2 tablet was spotted at the FCC with AT&T’s HSPA+ frequencies, which could potentially indicate that AT&T may offer the tablet in its lineup. The tablet, along with a single-screen slate, was announced a few months ago in Japan. The S2 will come with two foldable 5.5-inch display panels that can be used together to create a single large display or used to multitask by running different apps on each panel, like the simultasking mode on Sprint’s Kyocera Echo Android smartphone.

As AT&T has not announced the tablet for its network, it’s unclear if the S2 will debut on AT&T. FCC certification does not necessarily guarantee a carrier release even though the tablet does support AT&T’s 3G/4G HSPA+ network. If the carrier does not offer the tablet on its lineup, Sony could potentially still release the S2 unsubsidized through other retail channels.

According to the prototype spotted at the FCC, the tablet will have a removable battery. It’s still unclear how battery life will be affected by the two display panels. In my experience with the Kyocera Echo smartphone, battery life took a hit when I began to simultask and used both displays; that device comes with an extra standard battery in the box to accommodate for the power-draining dual displays.