It looks like Sony may be branding its next-generation flagship Android smartphone as the Xperia T. The device was previously known by its model number Xperia LT30p and the code name of Xperia Mint. Now, according to the latest certification from the DLNA group, we’re beginning to see the Xperia T branding. The device would follow the Sony Xperia S that debuted earlier this year at the Consumer Electronics Show. 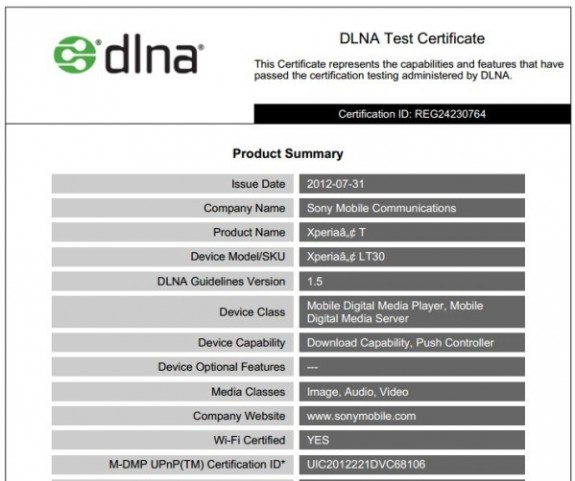 Previously rumored specs for the device include a dual-core Snapdragon S4 processor from Qualcomm clocked at 1.5 GHz, Android 4.0 Ice Cream Sandwich, and a 13-megapixel camera. The device will also have a 720p HD touchscreen as well.

And despite having a high resolution screen, it appears that Sony is trying to keep the display relatively compact at 4.3 inches compared to modern Android smartphones with screen sizes in excess of 4.6 inches, like the HTC One X, Samsung Galaxy Nexus, and Samsung Galaxy S III.

It is anticipated that Sony will formally launch and announce the smartphone at the IFA trade show in Berlin in September according to Unwired View.