It looks like that the much rumored and highly anticipated Sony Xperia Z smartphone will be making a CES debut as the device has been spotted early on the show floor of the trade show ahead of Sony’s press conference, which is slated for tomorrow, Monday. The device will allow Sony to better compete with recent released smartphones and phablets and upcoming ones, including the HTC Droid DNA and the Samsung Galaxy Note II to name a few. 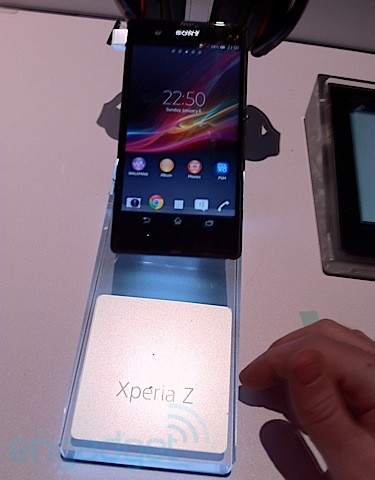 The 5-inch phablet has been rumored with specs such as a 1080p full HD display, quad-core Snapdragon S4 Pro processing power, and support for Sony’s new Exmor RS camera sensor that supports photo resolution up to 13 megapixels.

Additionally, recently leaked specs that were uncovered suggest that the Xperia Z will be at least splash-proof with a waterproofing coating. In terms of camera performance, the new thing to the Exmor RS sensor is the ability to record HDR video, which should help consumers capture more details in their footage when shooting in mixed lighting environments with both bright lights and dark shadows.

Specific specs, according to Engadget, are not yet available from the demo unit on the Consumer Electronics Show floor at this time, and likely Sony Mobile Communications will put up more information after the press conference.

The device will likely be the Sony premier flagship smartphone for 2013 to compete against the rumored Samsung Galaxy S4, the HTC Droid DNA, and others.