Ahead of the devices’ rumored unveiling at the Consumer Electronics Show, Sony’s phablet entries in the form of the Xperia Yuga and Xperia Odin handsets now stand proudly in new press photos. The devices will help Sony compete against more powerful smartphones from rivals, such as the Samsung Galaxy Note II, the HTC Droid DNA, and the HTC One X+, all of which have high resolution screens and quad-core processors. 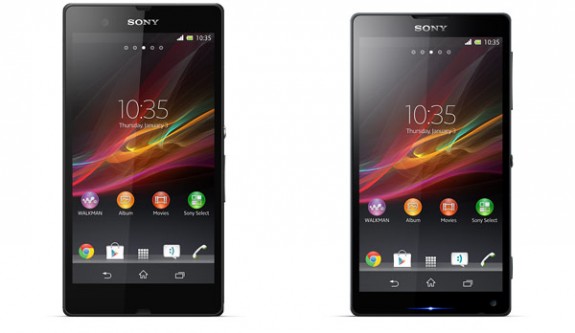 According to known leaked specs, both the Xperia Z and Xperia ZL smartphones will have a 5-inch display with a 1080p full HD resolution screen, quad-core processing power in the form of Qualcomm’s Snapdragon S4 Pro, and 2 GB RAM. Additionally, both phones will be launching with Sony’s new 13-megapixel Exmor RS sensor–the same camera sensor that will also be in a number of rival phones, such as the Oppo Find 5.

Another notable difference from the press shot is that the front-facing camera of the Xperia ZL (Odin) is placed at the bottom right corner of the screen rather at the top like on the Xperia Z and other competing smartphones.

Additionally, it appears that Sony is using the same 3 Android navigation keys that Google is using on the Nexus series rather than changing them like what manufacturers like Samsung is doing. The buttons are also placed on the screen rather than as capacitive touch buttons.

It’s unclear if both devices will be announced at the early January Consumer Electronics Show in Las Vegas. Xperia Blog is reporting that Sony may be announcing the Xperia Z in China on January 15.