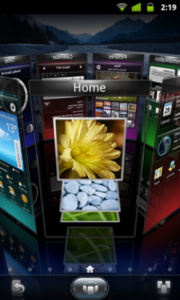 Tired of the stale Android UI or aren’t happy with what device-makers are slapping onto Android? SPB Shell 3D may be the solution for those looking to jazz up their device’s user interfaces. As its name implies, SPB Shell 3D offers a 3D user interface through a rotating carousel–sort of similar to what we’ve seen on the new HTC Sense on the HTC EVO 3D for Sprint–and a number of options for customizations.

One nice feature of the app is smart folders, which is similar to what Apple had implemented for iOS. SPB Shell 3D will analyze the contents–shortcuts to apps–placed within the folder and automatically name the folder appropriately based on the contents. For instance, place the NY Times and Wall Street Journal apps inside a folder and SPB Shell 3D will automatically name that folder News so you don’t have to name it yourself.

Right now, the major drawbacks to SPB Shell 3D are the price and the lack of wallpaper customization support. At $15, the app is on the pricey side, but for those who want something different, the app can be downloaded at Android Market.