So you’re looking to get a new Motorola phone that runs on one of the various 4G networks in the United States. While weighing your options,  you may have stumbled upon a trio of well known devices.

And while you may have been doing some research, sometimes it gets tricky, especially when the specs for the phones are on tons of different tabs in your browser. Well, I like making your smartphone decisions easier and that’s exactly what I am hoping this image from Droid-Life does. 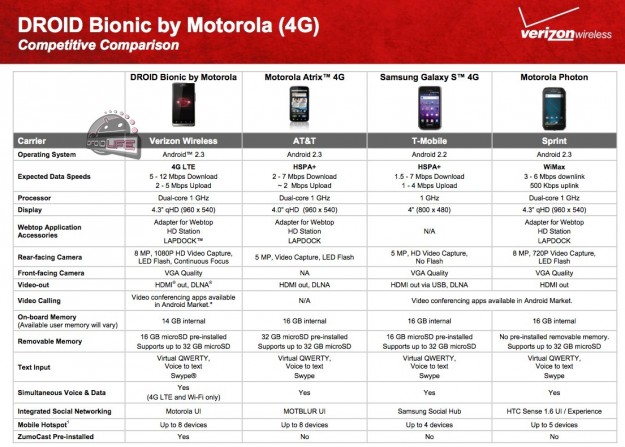 What you see here is a spec comparison sheet between the Droid Bionic, the Atrix 4G, the Photon 4G, and T-Mobile Samsung Galaxy S 4G which doesn’t really deserve to be a part of the discussion.

The chart also gives us a rundown of the Droid Bionic’s specs, if you hadn’t seen them already. 4.3-inch qHD screen, 16MB pre-installed microSD card. mobile hotspot. and more. What’s curious is that it lists 14GB of on board storage space which, is to say the least, a little odd. As is the listing of HTC Sense 1.6 for the Photon 4G.

So, what do you guys think? Droid Bionic win this showdown?