Specs for HTC Bliss and HTC Runnymede Leak Out

We’ve been waiting for some specifications on the HTC Bliss to leak out and luckily today, ThisIsMyNext has unearthed some of the upcoming device’s features. In addition, they have unearthed features of a device called the HTC Runnymede that appears to be a cousin of the HTC Titan, a device that HTC announced at the beginning of September.

The HTC Bliss will apparently feature a 3.7-inch display with WVGA resolution, a 5MP rear camera, a VGA front-facing camera, and a a 1GHz Qualcomm processor. It’s also said to be coming with something called a ‘charm indicator’ which will apparently light up when the phone has an incoming call. Apparently this is the feature that HTC is hoping catches on with women. 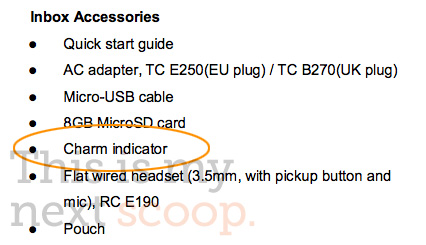 As for the HTC Runnymede, it will have a 4.7-inch display with WVGA resolution, a single-core 1.5GHz Qualcomm MSM8255 processor, an 8MP camera capable of putting out 720p video, a 9.9mm design, 16GB of internal storage, and there is also going to be Beats by Dre support. Unfortunately, it look like there will be some Runnymede’s that won’t ship with that last feature though.

No word on the Runnymede’s real name yet. We suspect HTC won’t be launching a phone with the name Runnymede. Just a guess. Also, no word on a release date for either device although the HTC Bliss recently passed through the FCC which means that a release could be close. Maybe on September 20th.

Anyone excited about either of these?