Ahead of an official announcement by either Verizon Wireless or LG, specs for an upcoming smartphone codenamed the LG Cayman were leaked. The device is rumored to go under the LG Lucid 4G moniker once its made available to consumers. The phone will slot in as a high-end mid-range device accompanying, rather than dethroning, the LG Spectrum, which is LG’s flagship Android smartphone for Verizon’s 4G LTE network and is seen as a variant of the Optimus LTE as well as the LG Nitro, which runs on rival AT&T’s LTE network.

The biggest thing about this phone will be its 4-inch super bright Nova Display screen, which will be a carryover from LG’s Optimus Black announced at the Consumer Electronics Show a year ago. The device’s display, unfortunately, will be capped at a more modest WVGA resolution rather than the 720p HD screen on the LCD IPS+ display of the Spectrum. 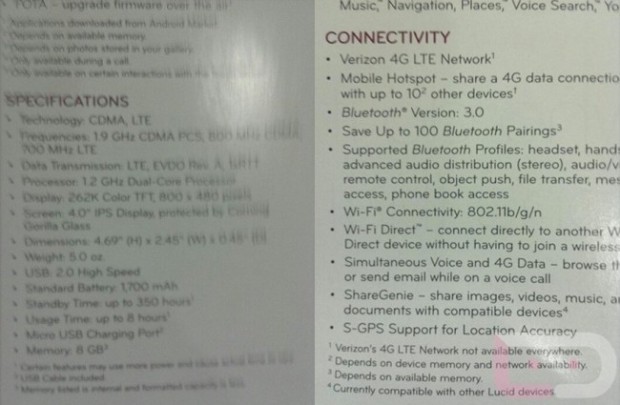 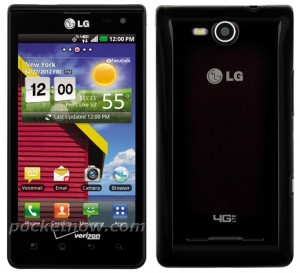 The device will have a dual-core 1.2 GHz processor, support Verizon’s 3G CDMA/EVDO and 4G LTE networks, and utilize Corning’s Gorilla Glass for its screen. Users who need to share the phone’s mobile broadband Internet connectivity can also use the LG Lucid 4G as a mobile hotspot.

The device is expected to launch at or below $200 with a two-year contract and could be arriving as early as next Thursday. So far, neither Verizon nor LG has made any announcements as to pricing or availability.

The Lucid 4G will also have 8 GB of on-board storage and it’s unclear if the device will have a micro SDHC card slot to accommodate additional storage based on the leaked information sheet found on Droid-life. The phone has been leaked before, including the device’s press photos.