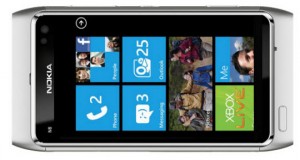 Last month when Nokia and Microsoft had jointly announced a new partnership that will result in Nokia’s adoption of Microsoft’s Windows Phone 7 platform on the phone-maker’s hardware, there were speculations that Nokia’s love affair was created due to money, and a lot of money at that being thrown from Microsoft to the world’s largest phone maker. Chatter continues today and Businessweek is continues to assert that Microsoft is paying Nokia a sum of $1 billion to adopt Windows Phone 7 while Nokia will be paying Microsoft a royalty fee for each Windows Phone 7 Nokia smartphone sold.

Nokia has stated after the official announcement that it had talks with both Microsoft and Google. The phone-maker, in a new strategy effort to re-gain momentum in the smartphone market was looking for a fresh start to replace its Symbian strategy moving forward, finally decided on Microsoft’s Windows Phone 7 platform, which the company had referred to as a fresh UI experience before. The reason, many had speculated, was financial, though the partnership seems to make sense as both Microsoft and Nokia has an uphill battle to face in the smartphone war, which is being dominated by Google and Apple.

By relying on Microsoft, Nokia may actually help Microsoft further the platform and give Windows Phone 7 the momentum it needs to really take off. The platform has been less niche than the OS that it replaces–Windows Mobile–but Microsoft still has a long way to go before Windows Phone 7 becomes as mainstream a name as iOS or Android. With Nokia’s expertise and massive global scale, Windows Phone 7 could potentially hit new price points and offer compelling, differentiating hardware characteristics against rivals. Nokia has demonstrated its power as a hardware company by releasing the Nokia N8, a Symbian-powered smartphone with a large 12-megapixel camera sensor, 720p HD video recording capabilities, Carl Zeiss optics, and Xenon flash, which is now priced at under $500 at select retailers. And unlike with other Windows Phone 7 partners, Microsoft is giving Nokia free reign of the mobile OS’s code, which means we can potentially see some killer hardware features in a flagship Nokia Windows Phone 7 smartphone in the future that will give the platform an edge over the current crop of devices.

In as much as the deal between Microsoft and Nokia is about money–both companies are trying to help boost their mobile divisions–it’s also about strategy, which Businessweek didn’t really consider in its article. Nokia reps have repeated in the past that the deal to go with Windows phone 7 is strategic–and I believe that–because going with Android would lead to commoditization of Nokia hardware. Reps say that there are already too many established phone-makers in the space–LG, Samsung, HTC, Motorola to name a few–and now with the ensuing tablet war we’re seeing PC-makers join the mobile space with Android, including Lenovo, Dell, Panasonic, Toshiba, and MSI. Additionally, given Google’s propensity to play favorites with each new Android OS revision release, Nokia may have a hard time proving itself to Google given it already has established working relationships. With the first Android device, Google dedicated resources to HTC to build the HTC G1, the first ever Android smartphone that was initially launched on T-Mobile USA. Motorola got a lot of love in delivering the first Android 2.0 smartphone in the form of the original Droid1. With Android 2.2, the Nexus One and the EVO 4G received a lot of coverage and HTC won that relationship again. And now, Samsung is the preferred Android-maker with Android 2.3 Gingerbread and the Nexus S. Going with Microsoft would eliminate give Nokia an edge over rivals and Nokia can, and has, leveraged its scale to win favorable terms in negotiations. Additionally, Windows Phone 7 may give Nokia entry into the difficult American market. With other competitors being more low profile when it comes to Windows Phone 7, Nokia stands the best to win momentum and market share in the U.S. market.