Spotify started gunning for Pandora when it offered a radio option in the desktop app, and now it’s going after Pandora’s mobile apps.

The latest version of Spotify for iOS includes the ability to listen to personalized radio for free. Unlike the rest of the Spotify app, the radio feature is ad-supported for users who don’t want to pay $9.99 per month for the streaming service. The free radio works like Pandora radio: users can listen to an unlimited amount of music, but they only have a limited number of skips available each hour.

The new radio feature adds the ability to give songs a thumbs up or thumbs down to personalize the station more. Songs that users give a thumbs up are added to a playlist they can listen to on the desktop app (or mobile app for Premium subscribers). The new buttons should make the radio stations much better than the desktop app which lacks those options. 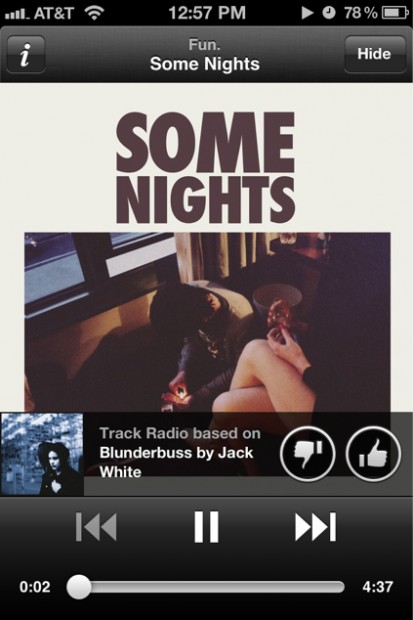 Users can choose to create playlists from almost anything. Playlists, albums, songs, and artists all have the radio option, so users can make the stations as broad or as specific as they want. The app also includes a number of genre stations with a surprising amount of granularity for the electronic and metal selections (choices include black metal, death metal, heavy metal, club/house, trance, and electronic).

The new feature is great for users who want Spotify’s wide selection of music but don’t want to pay for it. The ads might be annoying, but they give users another reason to pay for the service. It’s also great for Premium subscribers who like the radio option for discovering music but also wanted it in the mobile app.

Spotify’s release notes also say this version of the app is allergic to nuts, so be careful when feeding it.