There has been much speculation that the Galaxy Nexus from Samsung would launch on Sprint’s 4G LTE Now Network alongside the mid-range LG Viper 4G LTE on April 22nd, but it appears that will not be the case. GottaBeMobile reader Alejandro Martinez had informed us that a Sprint customer service agent online had told him that the device will be launching May 17, 2012. Users who are anticipating on using Google’s latest Ice Cream Sandwich Android smartphone on Sprint’s truly unlimited network will have about an extra month to wait it appears.

At agent, Michael, in the online chat conversation with Alejandro was not, however, able to confirm pricing information. Additionally, Michael adds that launch dates are subject to change and that the carrier cannot commit on it. 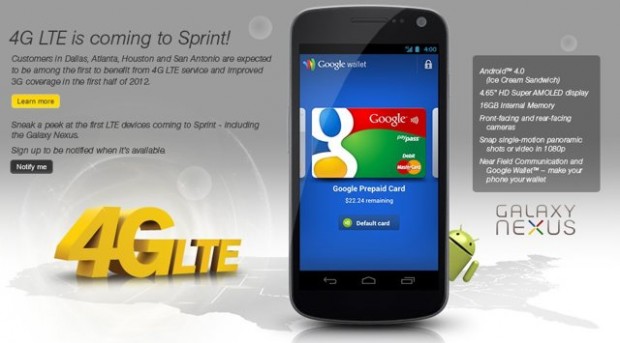 It’s unclear why Sprint is pushing out the launch date of the Galaxy Nexus, but given that it’s a highly anticipated and high profile device, perhaps Sprint wants to ensure that it’s new 4G LTE network is in working order before adding more eager power users to LTE. The carrier is in the midst of transitioning from WiMax to LTE for its next-generation 4G network, and with that, it probably wants to start small and slow with a mid-range device before launching the Galaxy Nexus and the EVO 4G LTE this summer.

Here is a copy of that chat transition:

Michael: It is expected to be released on may 17, 2012.
You: but i wanted to see how much longer
You: omg really!
You: why soo long?
Michael: Please know that release date are subjected to change and we
cannot commit on it.
You: ok well i guess i will wait
Michael: Also, release date are decided as per by Sprint and
manufacturer.
You: but can u help me know what else is in the phone
Michael: I would recommend you to stay tuned to www.sprint.com for
updates.
Michael: The Galaxy Nexus offers a 4.65″ Super AMOLED HD Display,
Android 4.0 Ice Cream Sandwich, and 16GB of internal memory along with
HD quality video.
You: do u know price
You: is it gonna be 300
You: ??
Michael: Sorry, we do not have price related information.
You: is this a secret?
Michael: Once the information is available, it will be posted on the
site.

Thanks to Alejandro for the tip.