Sprint Chooses Radically Different Approach for LTE Network, And It May Pay Off

Sprint’s Network Vision plans for rolling out its 4G LTE network in the U.S. is much different than what its larger rivals have done, and for the third largest carrier in the country this strategy may pay off in the long run. I got a chance to sit down at a formal lunch with Sprint vice president Kevin Kunkel and the network’s director of solutions engineering Kim Wade in San Francisco to talk about Sprint’s LTE strategy, which the company collectively refers to as Network Vision.

While all other networks in the U.S. marry a specific band or spectrum to a specific 2G, 3G, or 4G technology, Sprint’s multi-modal network allows the most efficient spectrum to work with the appropriate mobile broadband service. For example, AT&T reserves its 850 and 1900 MHz spectrum for GSM/3G/HSPA+ usage and that carrier operates its 700 MHz spectrum specifically for LTE. Similarly, Verizon uses a different slice of the 700 MHz spectrum for LTE while other bands are provisioned specifically to handle 3G or 2G connections. On Sprint, any of the bands or spectrum the carrier owns, operates, or leases can be used with any of the 2G, 3G, WiMax, or LTE technology.

The benefit to Sprint operating a multi-modal infrastructure is that this is more efficient and subscribers will get to hop on the right band depending if they’re indoors or outdoors. 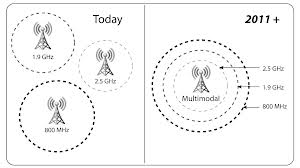 The old way of managing a tower is that you need separate towers for 2G, 3G, and 4G coverage. Each tower handles a specific band or spectrum for the right 2G, 3G, or 4G technology. Sprint’s multi-modal towers combines not only the 2G, 3G, or 4G management into a single tower, but will allow the network to choose the right spectrum to handle a user’s call. If a user is in a building, a lower frequency may be used for better in-building LTE coverage. If a user is outdoors in clear view of a tower, a higher frequency may be selected to allow faster LTE speeds.

If a user is in a city with high concrete and steel buildings and structures, Sprint could connect a customer’s 4G LTE data call to a lower spectrum, allowing for better in-building penetration and boosting reception when a customer is at work in a high-rise, for example. For rural areas with wide open space, using a higher spectrum can deliver faster speed to those customers.

The second benefit to the multi-modal is that it would allow Sprint to maximize its bandwidth to accommodate both the rising number of subscribers and the increase in data traffic. The carrier says that demand for data has grown nine-fold and that the San Francisco Bay Area where we had our meeting consumes about 20-25 percent more data than the national average. To accommodate this, rather then segregating the different bands that Sprint owns for its iDEN, CDMA, EVDO, WiMax, and LTE networks, it will allow any of those bands to operate with any of the technologies to allow the most efficient use of data.

In essence, this will give Sprint roughly about a 20 X 20 channel for LTE when maximized, which is double the 10 X 10 channel that Verizon has for its LTE deployment and far more than the 5 X 5 channel that AT&T is limited to in select markets. And given that Verizon’s network has slowed down considerably since it first launched due to more users and more data congestion on the network, Sprint’s larger channel will help maintain faster speeds over time.

Wade says that essentially, this large chunk of bandwidth from Sprint and as part of its agreement with Clearwire will allow Sprint to deliver speeds up to 100 Mbps in the future.

Unlike AT&T, T-Mobile, and Verizon which have all tied the service provisioning to the SIM card for service in the U.S., it appears that Sprint’s use of the SIM card is more limited to international travel for GSM markets. This is different than what its closest technology rival Verizon is doing. On Verizon, when a customer switches a SIM card to a different phone, the service is tied to the SIM so the new phone should be up and running instantly. On Sprint, the service is tied to the hardware itself, so you’ll have to log in online to migrate to a new phone or call Sprint to have a customer service representative do that. 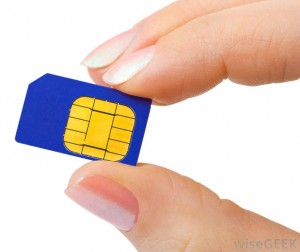 While there are pros and cons to either strategy, with the pro being the convenience that Verizon has enabled its customers by integrating the service to the SIM rather than to the device hardware, Sprint’s approach may help prevent outages due to incompatibilities with systems, towers, and network. When LTE first launched on Verizon, the network did experience some growing pains. As the self-proclaimed nation’s “most reliable network,” Verizon saw its LTE, and sometimes even its 3G, service go out with long periods of downtime when there was incompatibilities by switching to the use of SIM cards. So far on Sprint, I haven’t heard of any outages. 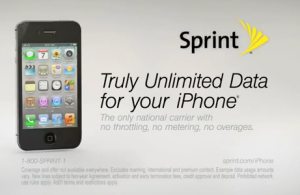 And though T-Mobile may be the closest competitor to Sprint to offer unlimited, unthrottled data with the appropriate plan, I think that Sprint may have more resources currently to deliver unlimited with usable speeds over the long haul. And a large part of being able to offer unlimited still is because Sprint has the capacity to do so thanks to clever network infrastructure enabled through its multi-modal tower equipment.

For now, Sprint’s speed promises are conservative and may not appear all too appealing to speed-hungry users. It will be up to Sprint to show that its network will be able to deliver consistent, fast speeds with little or no slow downs when there is more users on its LTE network. If it could do that, it will be a winning value proposition as both Verizon and AT&T have both migrated users to a metered LTE data plan, limiting the full potential that such fast speeds can achieve for a user.

Even for Sprint, It’s a Marathon

And despite its name, Sprint as a carrier appears to be in the race for the long haul. Admittedly, I was a bit skeptical of Sprint’s LTE network when the carrier conservatively gave estimates for 6-8 Mbps download speeds and 2-3 Mbps upload, Wade says that Sprint is under-promising and is looking to over-deliver. I’ve heard that mantra before from Verizon Wireless a few years ago when it began LTE deployment, but I think Sprint has more merits to its claims. Sprint definitely has a lot to prove. Our editor-in-chief Xavier Lanier has repeatedly bemoaned Sprint’s slow WiMax and EVDO speeds in the past in San Francisco, a highly populated market where AT&T leads in LTE speeds and Verizon is leading with coverage currently. This time, though, I think Sprint has the right technology and appropriate implementation to deliver its vision.

First, its multi-modal network strategy will allow Sprint to offer more bandwidth, to users regardless of the environment they are in. Better in-building coverage, faster speeds for open areas, and the right spectrum for the appropriate task–whether that’s voice, text, or data–will help maintain consistently robust speeds on the network.

Second, though the LTE network in the Bay Area is only about one-third live, meaning a third of the cell sites and towers are lit up with LTE right now, Sprint’s speeds, where available, match some of its best competitors out there. Though I haven’t tested the service myself, I’ve seen real-world speedtests and demos in the area where LTE speeds peak out at around 40 Mbps with speeds consistently hovering between 10-20 Mbps. These speeds are neck-and-neck with AT&T’s and T-Mobile’s LTE network in San Francisco and San Jose, California respectively, and these are the two fastest LTE providers currently in the Bay Area.

We’ll definitely have to see how Sprint’s speeds fare when there is more users and when the network officially launches. But for now, Sprint is showing its muscles. From the classic call clarity ‘pin drop’ to the unlimited era, Sprint has managed to show that it still has momentum running this marathon, and in this last leg of the race Sprint is showing that it can sprint to the finish line.