Earlier today, it looks like the Sprint Galaxy Nexus and Nexus S 4G Jelly Bean updates might roll out tomorrow. And now, based on some more evidence, it’s looking that is likely going to be the case.

Android Central has dug up some additional evidence that supports the Sprint Galaxy Nexus and Nexus S 4G Jelly Bean roll outs as taking place tomorrow. The evidence comes in the form of what appears to be an internal screen shot and very clearly, we can see that the updates, at least as of right now, are slated to roll out tomorrow.

Sprint has not yet confirmed the updates so it’s possible that tomorrow will come and go without any sort of upgrades though that’s looking unlikely at this point, based on the evidence at hand.

This could mean that Sprint might beat the Verizon Galaxy Nexus to Jelly Bean.

As for the Nexus S 4G, owners have been waiting for weeks for the update to arrive. Nexus S devices around the world have already received their upgrade to Android 4.1 Jelly Bean but Sprint’s device was unfortunately left out in the cold. 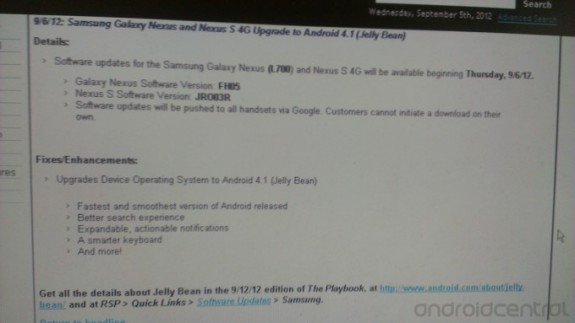 However, it finally looks like Sprint is prepared to roll out the new software to both devices which will bring all of the features and enhancements of Android 4.1.

Overall, it’s a big upgrade over Android 4.0 Ice Cream Sandwich and an update that Nexus S 4G and Sprint Galaxy Nexus owners should be looking forward to.

We’ll be on the look out for an official roll out tomorrow and one that should be coming through the pipes Over-the-Air.