Yesterday, evidence surfaced indicating that the Sprint Samsung Galaxy Nexus release date might be April 22nd, same day the LG Viper 4G LTE goes on sale. Today, more evidence has surfaced showing off the same date, which makes it all but certain that that is the date that Sprint is planning to launch its 4G LTE Nexus smartphone.

The new evidence comes courtesy of BGR and it states, very clearly, that April 22nd is going to be the launch day for the Galaxy Nexus.

We already know that Sprint employees are training with the device right now, training that ends on April 22nd. 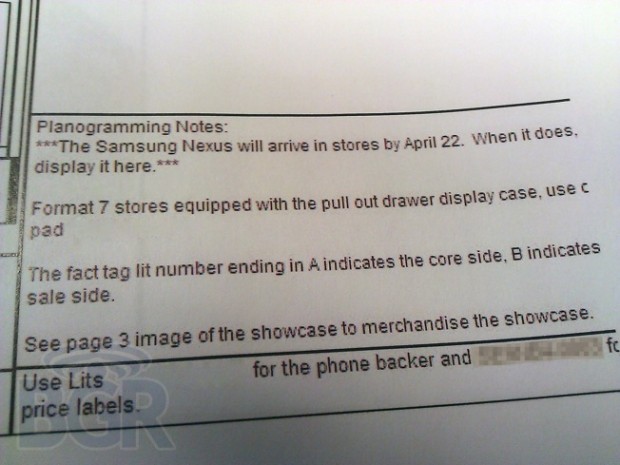 So, barring any setbacks, it appears that Sprint will launch two 4G LTE smartphones that day.

And while we think we know the release date, the pricing for the device remains unclear. The LG Viper 4G LTE is going to check in with a $100 on-contract price tag, but the Galaxy Nexus is a high-end device.

Sprint has never released a 4G LTE smartphone before so it’s unclear if it will offer it for the usual $199 0n-contract or if it will ask for more.

Sprint’s 4G LTE network is expected to launch in April as well and it will be available in a grand total of six markets from the outset.

Sprint’s 4G LTE network will offer data speeds that can get up to 10 times faster than data speeds found on the carrier’s 3G network.

You can check out how much faster 4G LTE is in the video below:

So for now, circle the 22nd in pencil as Sprint hasn’t announced anything official yet, but at this point, it would be odd not to see April 22nd come and go without a Galaxy Nexus launch on Sprint.