The device is exactly what we told you about earlier. A dual-core powered beast with a 4.52-inch Super AMOLED Plus display.

For those of you that are interested, the device is going to be going up for pre-order today in participating Sprint stores. You’ll have to put $50 down for a Sprint gift card and you’ll also be put on a Device Wait List so that you can waltz in and grab one on September 16th. 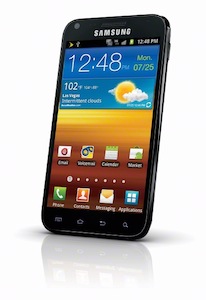 How does it look from your end? Anyone going to be picking one up?