HTC President Jason Mackenzie confirmed the good news today saying that the Sprint HTC One Android 4.3 Jelly Bean roll out would begin today, just a few days after the update missed the company’s self-imposed September deadline. The update roll out has begun as users are seeing the update appear in an Over-the-Air update.

In addition to Android 4.3 Jelly Bean features, the update will bring some enhancements and fixes to HTC’s Sense 5. The screenshot below, sent in by a GBM reader, shows a massive 574MB update for the Sprint HTC One and a small change log. 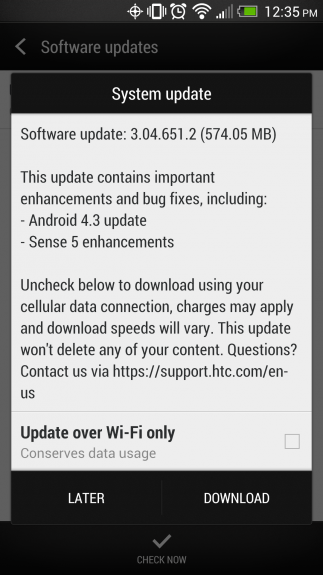 The Sprint HTC One Android 4.3 Jelly Bean update is rolling out now.

What Mackenzie didn’t confirm are roll outs for the AT&T, T-Mobile and Verizon versions of the HTC One which remain on Android 4.1 Jelly Bean, the same software that they launched with. We imagine that given the Sprint roll out and given Mackenzie’s original promise of September, the updates aren’t likely too far behind this one and could roll out in the near future.

Good news! 4.3 will begin to push to HTC One users on Sprint today.

The roll out will catch the U.S. versions of the device up with the international variant which received its Android 4.3 Jelly Bean update in late September after an update to Android 4.2 Jelly Bean.

HTC hasn’t said what is next for the HTC One though with an Android 4.4 KitKat update on the horizon, a launch is likely in October, it could be that the next big update for the flagship smartphone will be Google’s Android 4.4 update.

Sprint HTC One owners will want to be on the look out for an Over-the-Air update today. If there is no prompt, users will want to try heading into the device’s settings to check for the firmware.