LG recently announced one competitor for the Samsung Galaxy S III and the HTC One X in the LG Optimus LTE2, but it appears that it might have another trick up its sleeve in the form of the LG Eclipse which has made an unofficial appearance today.

BriefMobile has leaked both a photo and specs of the LG Eclipse aka LG LS970. The device appears to be a high-end device, based on some of the specifications that the device has on-board.

It supposedly is rocking a 28nm 1.5 GHz Qualcomm quad-core Krait processor which is a part of the Snapdragon S4 series. It’ll supposedly have an Adreno 320 GPU inside as well. If true, it would mean that this device would have one of, if not the most powerful processor on the market. 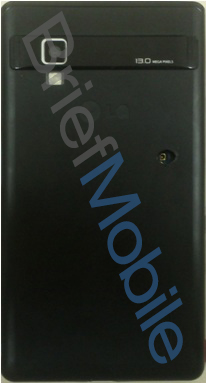 That’s not all the Eclipse is packing either. It also has a massive 4.67-inch WXGA LCD TFT display with 1280×768 resolution, a 13-megapixel camera rear camera, a 1.3-megapixel front-facing camera, 2GB of RAM, 16GB of internal storage, a 2100 mAh battery, and a 8.6mm design. We can assume that it will be running Android 4.0 Ice Cream Sandwich.

It’ll also be sporting 4G LTE capabilities which means that it will be able to pull down data speeds that are up to 10 times faster than typical 3G.

The LG Eclipse, which may be called the LG Eclipse 4G LTE, will apparently be heading to Sprint’s 4G LTE network at some point in the future, joining the likes of the HTC EVO 4G LTE, the Samsung Galaxy Nexus and the LG Viper 4G LTE.

Unfortunately, no release date was given so we don’t know when to expect the device to arrive.

Clearly, this is a device that LG is banking on to compete with the Samsung Galaxy S III and the HTC One X on AT&T but with the One X already out and the Galaxy S III slated for a June release in the U.S., LG better move quick or this device may get left behind, even with the monster specs.

Would you consider this phone over the One X or Galaxy S III?