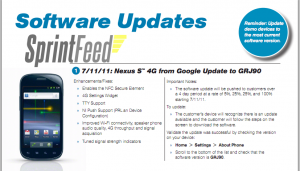 It looks like the Google Nexus S 4G Android Gingerbread smartphone for Sprint will be getting an OTA software update come this July 11th that will bring with it some new features, one of which is NFC support. The update, called GRJ90, will add these features to the 4G WiMax smartphone:

The inclusion of NFC Secure Element support could mean that Google and Sprint are prepping the phone for the launch of Google Wallet, which would allow you to tap your Nexus S 4G to an equipped near field communications reader at a physical store to pay for goods. The NFC chip within the Nexus S 4G would be linked to a credit card, and the hope of the mobile wallet initiative is to merge a user’s wallet with their smartphone so they’ll need to remember to carry less things with them as they’re leaving the house.

The update will not hit all users at once. It is scheduled to begin rolling out to customers over four days, beginning on July 11th. Once the update is ready for your device, you’ll find a notification asking you to download the update as it will be delivered over the air.