The Sprint LG Optimus G Jelly Bean update seems to be rolling out to users today though it’s unclear if the update is a part of a full on roll out, if it’s a mistake or if it’s part of a soak test that is intended to ensure the update is up to par before rolling it out to the masses.

Last year, the LG Optimus G rolled out for AT&T and Sprint in the United States with some pretty hefty features on board. It features a 4.7-inch HD display, a quad-core processor, a 13MP camera and, Android 4.0 Ice Cream Sandwich out of the box. Current owners, and those interested in the device have been waiting for the Android 4.1 Jelly Bean update to arrive, an update that is already available on the LG Optimus G elsewhere in the world and it appears that that roll out is either underway or close.

Today, according to XDA-Developers Forum, LG Optimus G owners on Sprint are starting to see the Android 4.1.2 Jelly Bean update roll out. So far, only a few have seen the update and Sprint has yet to confirm the update’s roll out. Typically, Sprint announces roll outs on the dot so something fishy is definitely going on. 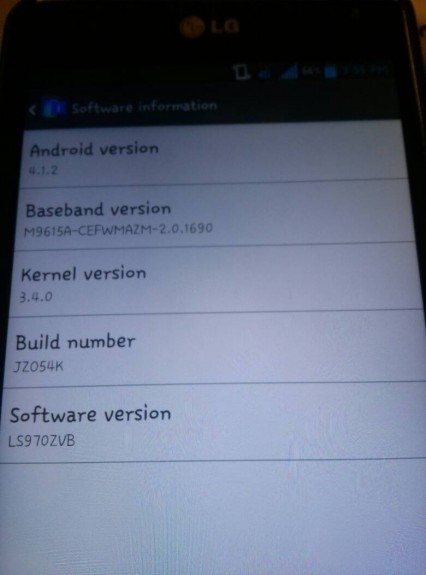 This could be the start of the Sprint LG Optimus G Jelly Bean roll out.

It could be that Sprint simply hasn’t announced the update yet or it could be a part of some type of testing. Those who are trying to manually install the update have, so far, seemingly failed. Android Police confirmed the update to be the real deal though so it’s looking like a remedy for those hoping to get Jelly Bean should come soon.

Whether that’s a much simpler installation process or a full on OTA roll out from Sprint remains to be seen but we imagine that the Now Network could announce the update in the near future given today’s roll out.

That said, those with a LG Optimus G on Sprint should certainly be checking the device’s settings for the update as it may prompt for installation. Users can also try and force the update using the Google Framework Services trick but thus far, that doesn’t seem to have worked.