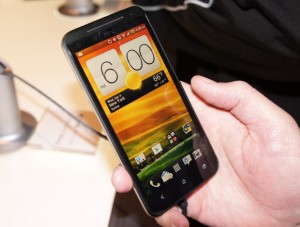 Despite a potential second quarter or summer unveiling of Sprint’s third-generation EVO flagship, the device known as the HTC EVO 4G LTE is now speculated to be launching about a month earlier than previously anticipated with a rumored debut date of May 18. Previous generations of EVO flagship phones–including the HTC EVO 4G on Sprint’s WiMax network as well as last year’s HTC EVO 3D–have launched in the summer time frame. With a May launch, it seems that Sprint is looking to push out the crown glory of the EVO franchise to compete against rivals T-Mobile USA and AT&T Mobility, both of which have already announced launch dates for their HTC smartphones.

The HTC EVO 4G LTE will retain many of the features that made the original HTC EVO 4G popular, but will add 4G LTE mobile broadband support for even faster Internet speeds on the handset. Faster speeds combined with Sprint’s philosophy for truly unlimited data and affordable plans will make this handset a compelling choice for users who are looking at high-end Android smartphones. Carry-overs from the original EVO include the kickstand, a powerful camera, and large display.

According to Phonedog, it looks like users who are eager to get their hands on the HTC EVO 4G LTE may not have to wait too much longer. The handset will be coming, if speculations hold true, on May 18.

The HTC EVO 4G LTE’s closest competitor will be AT&T’s version of the HTC One X. Both devices support 4G LTE network connectivity as well as a dual-core Qualcomm Snapdragon S4 applications processor, which is holding its own ground against the quad-core competition from NVIDIA in the form of the Tegra 3 chipset.

The HTC One S featured on T-Mobile will be a more mid-range handset, though there’s not that much gap in what separates mid-range from high-end between the One S and the One X/EVO 4G LTE.

So far, Verizon Wireless remains the sole carrier of the big four to not announce support for HTC’s latest One series smartphones.