With the release of the HTC EVO 3D we knew it would only be a matter of time before Sprint decided to put the HTC EVO 4G down but we had no clue when it would be doing so. Today, SprintFeed has supplied us with what amounts to a smartphones eulogy as a leaked document has revealed that the EVO 4G will be put out of commission starting with the white model in September followed by the death of the black HTC EVO 4G model in October. When the end finally does come, it’s likely going to be a sad day for those who love the EVO but just know this. The EVO 4G lived a life longer than most smartphones so keep that in mind when shedding your single tear. 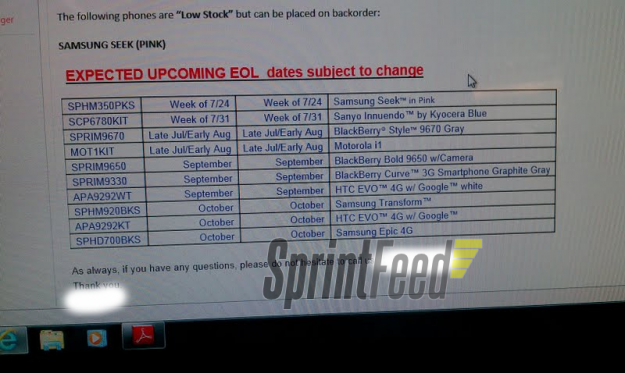 The EVO 4G isn’t the only phone that Sprint is planning on discontinuing either. The carrier’s Galaxy S device, the Samsung Epic 4G, will disappear in October, the BlackBerry Bold 9650 with camera will vanish in September and the graphite gray BlackBerry Curve will also cease to exist in September as well. The Samsung Transform, a stalwart in Sprint’s mid-range selection of device’s will become no more in October.

As the report points out, those of you who buy one of these phones before they all reach EOL (end of life) status and find yourself in need of a replacement device will not get the device that needs replacing. Instead, you’ll get a comparable device. And Sprint’s definition of the word ‘comparable’ might be different than yours so take good care of your device.

We’re still in July so if you’ve been thinking about any of these phones, you’ll probably want to go ahead and pull the trigger.