A leaked document reveals that Sprint is planning to launch a budget-friendly 7-inch Android tablet for just under $100 on the 3G Now Network. News of the tablet comes just on the heels of Sprint placing the HTC EVO View 4G, which at the time of launch was and is a high-end 7-inch slate, on the end of life (EOL) list. The new 3G-only tab will be made by ZTE and is called the ZTE Optik.

The tablet had been rumored prior to CES and has appeared in rendered leaks. The device will, like the WiFi-only PlayBook and the HTC EVO View 4G, have a 7-inch display of unknown resolution. It will have a dual-core 1.2 GHz processor, 16 GB of on-board storage, 1 GB RAM, and a 5-megapixel rear camera along with a 2-megapixel front camera. The device will have stereo speakers and hotspot support for tethering up to five devices. 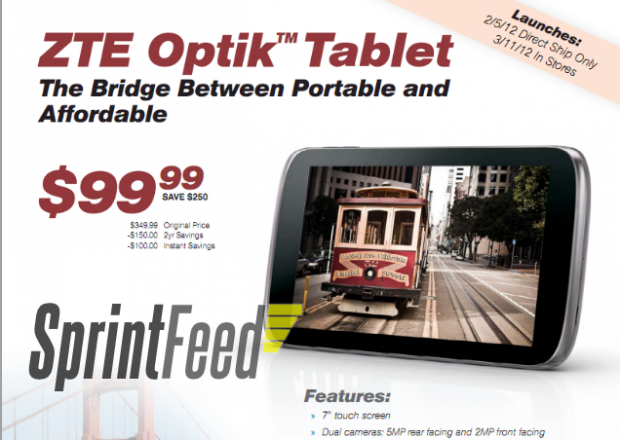 The tablet will be launched with Android 3.2 Honeycomb and there’s no word if Sprint will provide an upgrade path to Android 4.0 Ice Cream Sandwich. The device will debut for $99.99 on a two-year contract and will land in Sprint retail stores starting March 11. The device will be available earlier than that through web and phone channels starting February 5.