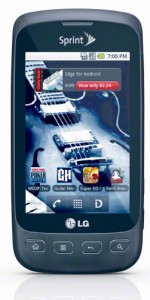 Sprint will be launching its budget-conscious LG Optimus S Android 2.2 device on Sunday November 7th. Despite being a more mid-range Android handset–the device will retail for $50 after a $100 mail-in rebate and on a two-year Sprint service agreement–the LG Optimus S will launch with the most current version of Android, Android 2.2 Froyo. Additionally, it will have a 3.2-inch display, a 3.2-megapixel camera, and a 600 MHz processor. The LG Optimus S will be the third device to launch with Sprint ID.

I had a chance to play with a variant of the Optimus Android phone at an LG table at CTIA, and the device is fast despite having a 600 MHz processor–higher end Android handsets come with 800 MHz or 1 GHz of CPU processing power.

The nice thing about the Optimus S and the other two phones with Sprint ID is that the device will ship with pretty much stock Android. Rather than providing a heavily customized version of the phone out of the box, Sprint is allowing the user to customize the device to his/her preference by downloading widgets, wallpapers, and skins that come pre-bundled in a package. You can also check out our look at the Samsung Transform if you’re curious about Sprint ID.