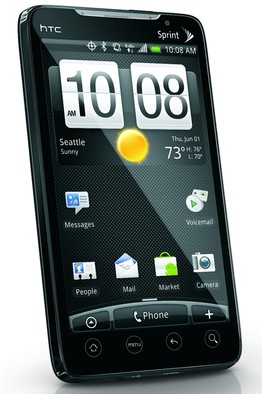 There’s a lot to like about the Sprint Evo 4G and I’ve had a few friends tell me that they’re going to buy the device. It runs on Sprint’s speedy next-gen network, can act as a hotspot and runs on Google’s Android operating system. But, Walt Mossberg from the WSJ reviewed the phone over the past couple of weeks and confirmed my suspicions that this phone isn’t ready for prime time.

Mossberg observed the phone hitting over 3Mbps downloads and 1Mbps uploads from downtown Baltimore. Pretty impressive stuff from a mobile device of any kind. It looks like this would be a good device to buy if you’re willing to live on the bleeding edge and live/work where there’s a strong 4G signal.

The most serious problem with the phone is that the 4G radio takes a serious toll on battery life. If you’re like a lot of users, you probably don’t actually use bandwidth-intensive apps most of the day.

And, when using 4G, the EVO’s battery runs down alarmingly fast. In my tests, it didn’t last through a full day with 4G turned on. The carrier, in fact, is thinking of advising users to turn off the 4G network access when they don’t think they need it, to save battery life. This undercuts the whole idea of faster cellular speeds.

Another major issue is that Sprint’s 4G network isn’t mature. Sprint is actively adding markets, but most places are void of 4G coverage than lit up so far.

When Sprint sent us an Overdrive wireless hotspot a couple months ago I couldn’t even access the 4G network in Seattle. Ben Lang was able to access 4G in Honolulu with the device after getting some help from Sprint. My wife took the same Overdrive unit to Las Vegas to use at a conference. She said it was much faster than using a Sprint MiFi and the Internet felt just as fast as it did at home and at her office.