While we know that the LG Viper 4G LTE will be Sprint’s first 4G LTE smartphone, we still don’t know when it’s going to arrive exactly. And while Sprint remains mum, a leaked document indicates that the device will be launching later on this month on April 22nd.

The leaked document comes from Engadget and it clearly shows a release date of April 22nd for the LG Viper 4G LTE. Earlier this month, Sprint confirmed that the device would be launching later on in the month and now, we finally have a specific release date to look forward to.

This isn’t the first time we’ve heard April 22nd for the Viper 4G LTE either which means that it seems to be a likely candidate for a release date. 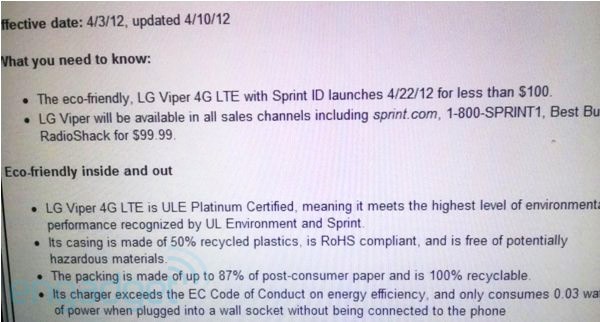 The LG Viper 4G LTE will go up for pre-sale on April 12th and it’s going to cost $100 on-contract, making it an affordable option for those that wish to get on Sprint’s new high-speed network.

The LG Viper is an eco-friendly device and it features Android 2.3 Gingerbread, a 1.2 GHz dual-core processor, 1 GB of RAM, mobile hotspot support, a 5MP rear camera, and a VGA front-facing camera.

It won’t be the only 4G LTE smartphone that Sprint leaks in the days ahead however. The Now Network also plans to launch the Samsung Galaxy Nexus, also rumored to be coming in April, while it will also be launching the HTC EVO 4G LTE sometime afterwards.

The EVO 4G LTE has been rumored to be coming in June.