Further leaks suggest that Sprint’s first batch of 4G LTE smartphones running on Google’s Android operating system may launch as early as this month in the timeframe of April 15-22. The LG Viper, a mid-range Android device and the Google flagship Samsung Galaxy Nexus are scheduled to launch during this time according to several leaks. A recent tip to Electronista reveals that the launch date is targeted as April 15.

The Verge is noting that Walmart-owned warehouse chain Sam’s Club is scheduled to carry the Galaxy Nexus beginning on April 22. It’s unclear if the launch date for the phone will be different for different retailers at this time, or if the launch will be later, rather than April 15th date proposed by Electronista. 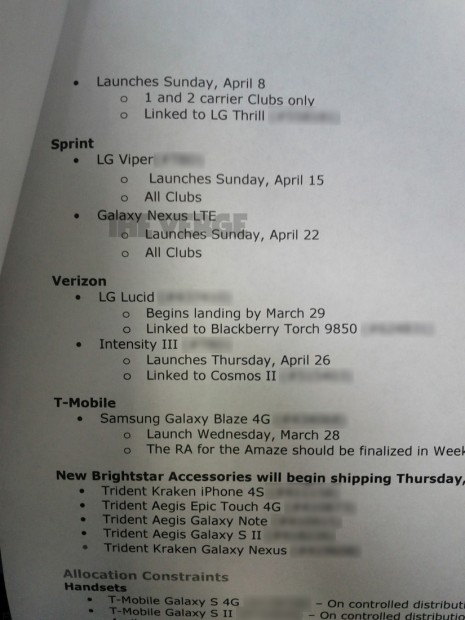 Sprint had originally announced both Android smartphones, along with a multi-mode 3G/4G WiMax/4G LTE mobile hotspot device at the Consumer Electronics Show earlier this year in Las Vegas, but the Now Network was very close-lipped on the details of the phones, stating that it wanted to preview the device and that finalized details and specs will come closer to launch.

It is believed that the Sprint edition of the Galaxy Nexus will be close to the Verizon model, carrying 32 GB of non-user expandable storage. The device will have near field communications (NFC) support and like the Galaxy S 4G before it, will come with Google Wallet support as well for contact-less payments.

The device may get a processor speed bump to a dual-core 1.5 GHz chipset as a consolation for the delay in launch between the international GSM edition of the Galaxy Nexus and the Verizon model with Sprint’s LTE model.