A leaked screen capture of a computer inventory system may have revealed Sprint’s tentative plans to launch its flagship Android smartphone, the HTC EVO 3D, on or around June 4th. The smartphone was announced initially following intense leaks and rumors at the CTIA tradeshow a few months ago in Orlando, Florida as the successor to the company’s popular HTC EVO 4G. 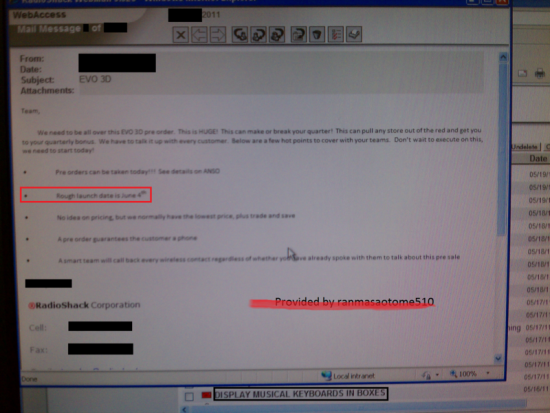 The HTC EVO 3D, like the EVO 4G, will utilize Sprint’s 4G WiMax networks and will come with unlimited 4G access and a capped 5 GB 3G mobile broadband access plan. The device provides a number of upgrades from its predecessor, including the ability to view 2D and 3D content on a high resolution qHD glasses-free auto-stereoscopic 3D screen, the ability to record and capture videos and images in 2D and 3D with a dual-lens rear camera, an updated HTC Sense user experience, and faster dual-core 1.2 GHz processor.

The HTC EVO 4G, the predecessor to the 3D model, is still one of the best smartphones on the market today nearly a year after its consumer debut. The device’s basics, which includes the 4.3-inch WVGA display, kickstand, 4G network access, and single-core 1 GHz CPU, can be found nearly a year later on more modern devices, like the HTC Inspire 4G for AT&T and the Thunderbolt for Verizon Wireless.

More recently, at the Google I/O conference, HTC had worked with some game developers, including Gameloft, to showcase 3D gaming on the device. Gameloft had showcased a nice 3D game running at nearly 30 frames per second.

Like the Samsung Infuse 4G, the HTC EVO 3D will not have a dedicated HDMI port on the device. Users, instead, must connect to an accessory adapter, called the MHL adapter to the micro USB port on the device, which they then can plug their HDMI cable to. The adapter does require the phone to be connected to a power source.

Sprint had originally planned on calling the HTC EVO 3D the HTC EVO 4G 3D, but decided against using both 4G and 3D in the name as it may be confusing.