Best Buy has done a great job capturing the consumer mindshare, and wallet-share, over the past few years, but Staples is about to dive in full force in an attempt to become the go to retail location for tablets. As this week’s ad for Staples suggests, you can go into a local Staples location and go hands on with Android and BlackBerry tablets as well as the Dell Inspiron Duo and two of the hottest eBook readers. 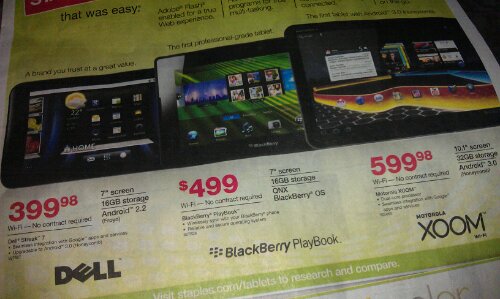 I was in the local Staples, checking out the new displays and caught site of the Android endcap which prominently declares the arrival of Android at Staples. At this point, the tablets hadn’t been setup, but the BlackBerry PlayBook, Xoom and Nook Color were prominently displayed.

You should be able to walk into your local Staples and go hands on with the following Tablets:

While some stores may be hiding the Xoom, it is hard to miss these tablets as you walk through the store. Best of all, each of the tablets that had been set out for display was easily accessible. Rather than setting out demo units that weren’t connected to the internet Staples has in store WiFi which all of these tablets can connect to. This allows you to really check out the full capabilities of each Tablet within a few feet of each other. On a side note, anyone can use the in-store WiFi to connect and check your email. 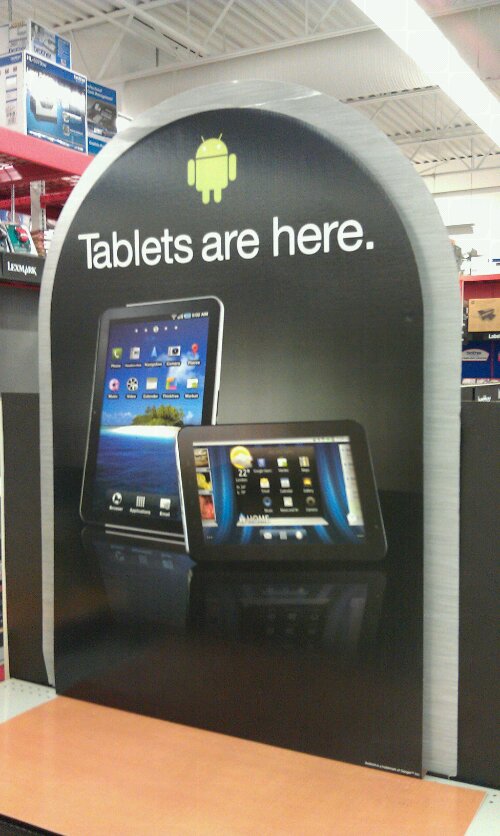 In addition to the numerous tablets, Staples also has the hottest eBook readers on display for you to test out – the Kindle and the Nook Color, which is essentially an Android tablet now that it has apps.

While there is no iPad in the store, the tablet setup at Staples provided the most access to tablets I have seen outside of CES. The demo setups are also designed to let you play with and pick up the devices. Thanks to the popularity of the iPad, even without one in the store, most users will have the opportunity to play with the iPad thanks to a friend or coworker.

It’s great to see that tablets are coming into retail stores in a way that allows consumers to actually play with and use the devices. This is the type of retail presence that Android and all tablets need to have a chance at competing with the ever present iPad.