Source code for a website made by video game publisher Electronic Arts seems to have revealed the Star Wars Battlefront release date that gamers the world over have clamored for. 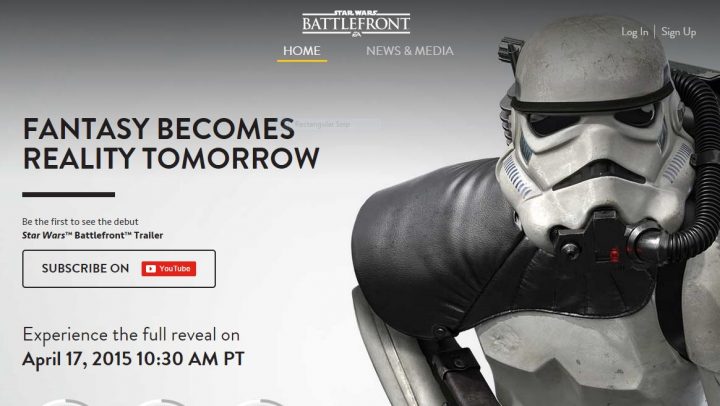 It seems like something small, but having a Stars Wars Battlefront release date in November tells us a lot about the game itself. If there is a story mode, it now seems likly that Star Wars Battlefront won’t reveal too much in the way of new characters and events since Star Wars: The Force Awakens isn’t set for release until a month later, on December 18th. Star Wars: The Force Awakens is the first major movie release for the franchise in years, and Disney isn’t talking about the story until the movie’s release.

Source code refers to the actual markup language that web pages are made up of. This code tells the browser what the web page is going to look like and how it’s going to behave. It seems credible that Electronic Arts would have source code detailing the Star Wars Battlefront release date hidden so that it’s ready to share it with everyone the moment it’s announced.

Even as we’re learning more about Star Wars Battlefront there’s a lot to look forward to.

Star Wars Battlefront will be a first-person shooter game developed by DICE, one of EA’s top-tier internal studios. Instead of focusing on a single player story, allegedly the game will focus on multiplayer, letting players team up for big battles inspired by the technology and factions found in the Star Wars franchise. In some ways, Battlefront may feel like Titanfall due to its multiplayer roots. Users who don’t have a current-generation console could be forced to upgrade if they want to play the game. A report from GameInformer hints at Star Wars Battlefront only being for those with an Xbox One, PS4 or capable PC.

All told, it’s shaping up to be a very, very interesting holiday season for video game fans the world over. If done correctly, Star Wars Battlefront could give players what the franchise has lacked for a very long time: an easier way to get into the Star Wars franchise. Star Wars: The Old Republic has been available for some time, but requires that users have a reasonably powerful PC. It’s not exactly an easy game to dive into since it’s based around role-playing too.

If this Star Wars: Battlefront release date is accurate, there’ll be a lot of competition for first-person shooter lovers this holiday season. Last week video game developer Activision teased Call of Duty: Black Ops 3, a direct sequel to its most widely sold game in the franchise to date. Microsoft is also planning the Halo 5: Guardians release for this November. Halo 5 will be exclusive to the Xbox One and act as bait for upgraders during the holiday shopping season.