Star Wars: Knights of The Old Republic, the classic BioWare RPG is coming to the iPad sometime in the near future.

While BioWare hasn’t yet announced its 2003 RPG for the iPad, but IGN has an exclusive review of the game. The review doesn’t give a release date for the game, but a release sometime in the next week or two sounds likely.

Star Wars: Knights of The Old Republic lets players create their own character in the Star Wars universe as they try to topple Darth Malek and unravel the mystery of Darth Reven. Players start as a scoundrel, scout or soldier about a starship, and eventually learn to control the force as a Jedi Guardian, Sentinel or Consular. 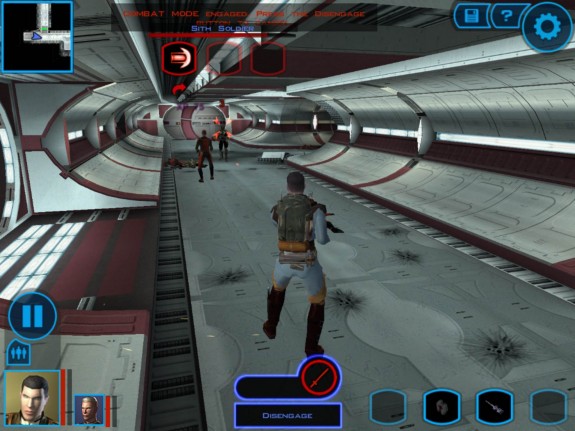 Like more recent BioWare games, Knights of the Old Republic lets players choose between playing as a good or evil person. Depending on how the player plays the game they can either choose to follow the light-side or dark-side of the Force, with Jedi or Sith powers that reflect their preference.

According to IGN‘s review the game still holds up well, largely thanks to its fantastic story set 4,000 years before any of the Star Wars movies and its excellent roster of characters. The review claims navigation is clunky with the iPad’s touchscreen controls, but it isn’t a problem in the combat.

Combat is turn-based using a d20 system like Dungeons & Dragons where rounds each last six seconds. The numbers all play out behind the game, however, so gamers only have to keep track of what moves they queue up for their characters.

Star Wars: Knights of The Old Republic was a fantastic game on Xbox and PC ten years ago, and it should be a must play for any iPad user who hasn’t played it yet. The iPad release is also a great excuse for those who did play the original to revisit the game.